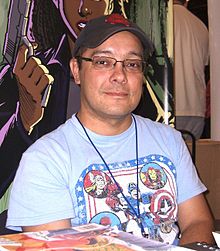 Jose Marzan Jr. is a 39-year veteran of the comic book industry, having started as an intern at Marvel Comics in 1983 at the age of 16. Following his internship, Marzan attended The Cooper Union for the Advancement of Science and Art, where he received a Bachelor of Fine Arts . During that time he worked as an assistant to various comic book professionals, and as an art assistant (or “Romita Raider”) for 2002 Eisner Hall of Fame recipient John Romita Sr. In 1989 and 1990, his paintings were exhibited in The Society of Illustrators Annual exhibition in New York City.

In 2008, Marzan completed a five year run on Vertigo Comics’ Y: The Last Man, having the distinction of being the sole inker on the title over its five year, 60 issue run. Jose Marzan Jr. received two 2008 Will Eisner Comic Industry Awards. One award (along with penciller Pia Guerra) for Best Penciller/Inker or Penciller/Inker Team for their work on Y: The Last Man (Vertigo/DC Comics), and a award (alongside his fellow creators Brian K. Vaughan and Pia Guerra) for Y: The Last Man as Best Continuing Series.

A list of comic book titles he has worked on can be found at comicbookdb.com.